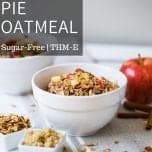 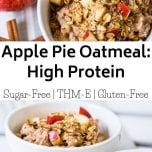 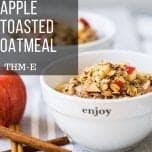 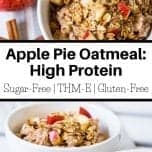 This creamy, Apple Pie Oatmeal recipe features the flavors of apple pie and packs some extra protein to keep you full all morning!

It may be August in the south, but it’s starting to get chilly once the sun goes down! Well, chilly may be a relative term…

That’s how you know you’ve lived in the south for a while: if the weather gets below 75 degrees F, it’s time for a sweatshirt!

As soon as the temperatures begin to dip, this Apple Pie Oatmeal becomes one of my favorite options for breakfast.

Apple season has started here in North Carolina. They are tasting so fresh right now! I love finding ways to work them into my meals during this time of year.

I created this recipe for Apple Pie Oatmeal a few years ago when I began THM. It’s perfect any time of the year, but it’s especially good when the apples are fresh.

One of the things I love most about the Trim Healthy Mama (THM) way of eating is that I don’t have to give up healthy superfoods like oatmeal and apples.

Tips for Making This Recipe

To prepare your apple pie oatmeal, start off by dicing up an apple.

I like using gala apples because I can easily find organic gala apples near me. But any kind of apple would be good!

Make sure you’re using a small apple, or just use half of a large apple to keep your net carbs below 45 grams.

Most recipes for oatmeal have you bring your liquid to a boil and then add the oats.

I’ve discovered that I really prefer the texture of my oatmeal if I add the oats to the liquid from the beginning.

I also prefer using a combination of almond milk and water. They taste so much creamier that way!

In a small saucepan, combine the oats, almond milk, diced apple, cinnamon, nutmeg, cloves, allspice and a pinch of salt.

Mix them up and set the heat to medium.

As your apple pie oatmeal is heating up, stir it every so often so it doesn’t stick to the pan.

Once it starts to boil, lower the heat to medium-low. At this point your kitchen is starting to smell like apple pie!

Cook your oats until the apples are tender and the liquid has been fully absorbed.

If you’re in a time crunch, you can keep the heat at medium, but be sure to stir more frequently to prevent the oats from sticking.

If the liquid is fully absorbed but your apples aren’t tender yet, you can add a little water to thin it out a bit (usually 2-3 Tablespoons is plenty).

How to boost the protein

One of the important building blocks for all THM meals is protein.

I’ve found that my body burns through the carbs in my E meals really quickly.

The key to not getting too hungry before your next meal is to boost the protein.

The first time I tried developing this recipe, I added protein powder. Unfortunately, that gets really grainy when it’s heated.

I mentioned this to a friend and she told me that Jennifer Aniston adds egg whites to her oatmeal.

I gave that option a try the next time and WOW! Not only did the egg whites add 10 grams of protein, but they also made the texture kind of fluffy.

Back to our apple pie oatmeal recipe:

Once your apples are tender, it’s time for the egg white magic.

First, reduce the heat to low.

Keep stirring until the egg whites are absorbed and the mixture is heated through.

If your heat is too high, the eggs may curdle. That won’t change the way it tastes, but it looks a little weird.

Next, check your seasonings.

I usually don’t add any sweetener to my bowl because the apple adds natural sugar. But my family prefers their food sweeter so I add 2-3 teaspoons of Pyure granulated sweetener to theirs.

If you want to elevate your oatmeal to a whole new level, try toasting some oats to sprinkle on top!

I toast mine by adding 1/2 cup to a saute pan, spraying them lightly with coconut oil, and then heating them until they’re a deep brown.

The 14 grams of protein in this Apple Pie Oatmeal is usually enough to keep me satisfied until my next meal.

BUT, if I know it’s going to be longer than 3 hours until I eat again, I add a scoop of collagen either to the oats or to my coffee or tea for an extra 11 grams of protein.

I hope you enjoy this recipe as much as I do! 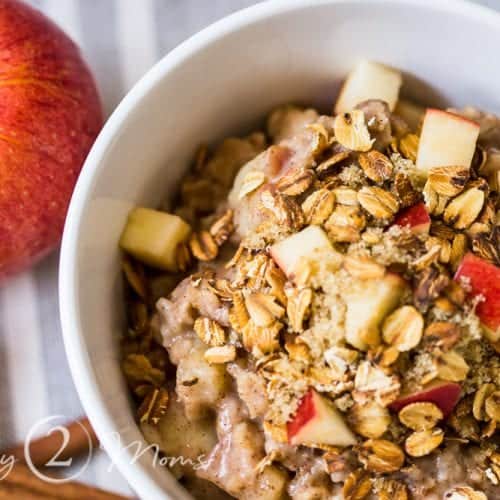 Please note that we are not medical or nutritional professionals. We include nutrition information for our recipes as a courtesy to our readers. It is calculated using WP Ultimate Recipe and we remove erythritol and xylitol from the final carb count because that is how THM calculates carbs. Please refer here for our complete Nutritional Disclosure. 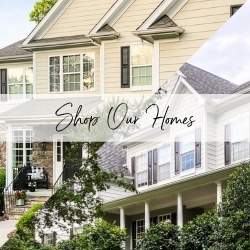 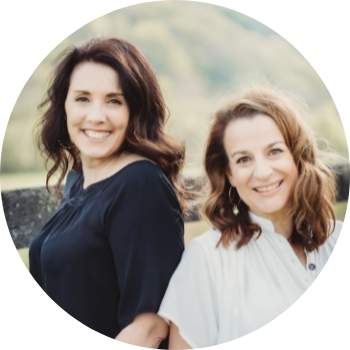 Hi there!  We're AnnMarie and Anne and we're Simply 2 Moms! Two moms who live across the street from each other and consider ourselves framily…that lucky combination of friends who are like family.  We share many similarities including a love of creating our best life possible.  We hope you enjoy our adventures of family, food & home!
Read more...